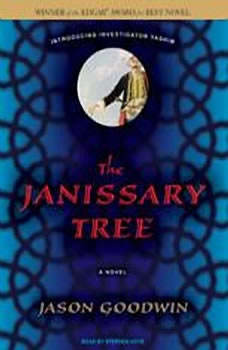 The Janissary Tree, the first book in a new series, is set in a most extraordinary world and features a most extraordinary sleuth. It is 1836. Europe is modernizing, and the Ottoman Empire must follow suit. But just before the sultan announces sweeping changes, a wave of murders threatens the fragile balance of power in his court. Who is behind them? Only one intelligence agent can be trusted to find out: Yashim Togalu, a man both brilliant and near-invisible in this world. You see, Yashim is a eunuch. He leads us into the palace's luxurious seraglios and Istanbul's teeming streets, and leans on the wisdom of a dyspeptic Polish ambassador, a transsexual dancer, and a Creole-born queen mother. He finds sweet salvation in the arms of another man's wife (this is not your everyday eunuch). And he introduces us to the Janissaries. For 400 years earlier the sultan had them crushed. Are the Janissaries staging a brutal comeback?

The Bellini Card
Yashim the Eunuch #3