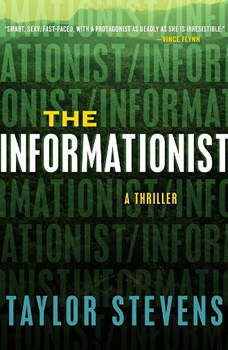 The Informationist: A Thriller

Governments pay her.
Criminals fear her.
Nobody sees her coming.

Vanessa “Michael” Munroe deals in information—expensive information—working for corporations, heads of state, private clients, and anyone else who can pay for her unique brand of expertise. Born to missionary parents in lawless central Africa, Munroe took up with an infamous gunrunner and his mercenary crew when she was just fourteen. As his protégé, she earned the respect of the jungle's most dangerous men, cultivating her own reputation for years until something sent her running. After almost a decade building a new life and lucrative career from her home base in Dallas, she's never looked back.

A Texas oil billionaire has hired her to find his daughter who vanished in Africa four years ago. It’s not her usual line of work, but she can’t resist the challenge. Pulled deep into the mystery of the missing girl, Munroe finds herself back in the lands of her childhood, betrayed, cut off from civilization, and left for dead. If she has any hope of escaping the jungle and the demons that drive her, she must come face-to-face with the past that she’s tried for so long to forget.

The first book in the Vanessa Michael Munroe series, gripping, ingenious, and impeccably paced, The Informationist marks the arrival or a thrilling new talent.

“Stevens’s blazingly brilliant debut introduces a great new action heroine, Vanessa Michael Munroe, who doesn’t have to kick over a hornet’s nest to get attention, though her feral, take-no-prisoners attitude reflects the fire of Stieg Larsson’s Lisbeth Salander….Thriller fans will eagerly await the sequel to this high-octane page-turner.”
—Publishers Weekly, starred, boxed review