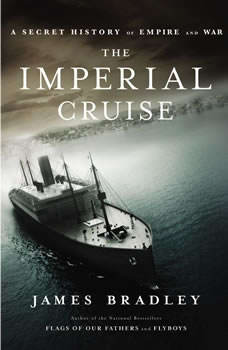 The Imperial Cruise: A Secret History of Empire and War

In 1905 President Teddy Roosevelt dispatched Secretary of War William Taft, his gun-toting daughter Alice and a gaggle of congressmen on a mission to Japan, the Philippines, China, and Korea. There, they would quietly forge a series of agreements that divided up Asia. At the time, Roosevelt was bully-confident about America's future on the continent. But these secret pacts lit the fuse that would-decades later-result in a number of devastating wars: WWII, the Korean War, the communist revolution in China.One hundred years later, James Bradley retraces that epic voyage and discovers the remarkable truth about America's vast imperial past-and its world-shaking consequences. Full of fascinating characters and brilliantly told, THE IMPERIAL CRUISE will forever reshape the way we understand U.S. history

Enjoyed other books by this author, but this tome was too much of a different political flavor than prior books.

I was absolutely astounded by the subject matter of this book! I had expected it to be a discussion of the cruise itself and honestly wasnt that thrilled at the prospect of reading it.Instead, the book shocked me and presented me with new American History material that I was frankly unaware of. This book is a mustread for every student and scholar of 19th and 20th Century American and Asian History.I came away angry at the sanitized propaganda that all of us have been fed as students of American History at all levels! It is amazing to me that we are opening Soviet archives and discovering new material about the Nazis and the Holocaust almost every day and each new discovery is hailed as a watershed event.Meanwhile a vast amount of American History, much of it in plain sight, is overlooked or ignored presumably because we might be labelled as UnAmerican for speaking the truth. READ THIS BOOK!