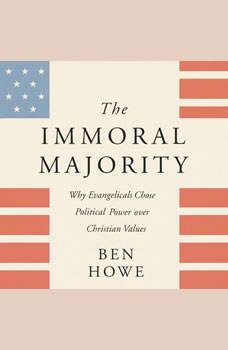 Evangelicals are losing the culture war. What if it’s their fault?

In 2016, writer and filmmaker Ben Howe found himself disillusioned with the religious movement he’d always called home. In the pursuit of electoral victory, many American evangelicals embraced moral relativism and toxic partisanship.

Whatever happened to the Moral Majority, who headed to Washington in the ’80s to plant the flag of Christian values? Where were the Christian leaders that emerged from that movement and led the charge against Bill Clinton for his deception and unfaithfulness? Was all that a sham? Or have they just lost sight of why they wanted to win in the first place? From the 1980s scandals till today, evangelicals have often been caricatured as a congregation of judgmental and prudish rubes taken in by thundering pastors consumed with greed and lust for power. Did the critics have a point?

In The Immoral Majority, Howe—still a believer and still deeply conservative—analyzes and debunks the intellectual dishonesty and manipulative rhetoric which evangelical leaders use to convince Christians to toe the Republican Party line. He walks us through the history of the Christian Right, as well as the events of the last three decades which led to the current state of the conservative movement at large.

As long as evangelicals prioritize power over persuasion, Howe argues, their pews will be empty and their national influence will dwindle. If evangelicals hope to avoid cultural irrelevance going forward, it will mean valuing the eternal over the ephemeral, humility over ego, and resisting the seduction of political power, no matter the cost. The Immoral Majority demonstrates how the Religious Right is choosing the profits of this world at the cost of its soul—and why it’s not too late to change course.