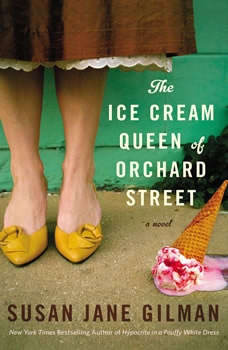 "A rich literary feast of 31 flavors (and twice that many colors, scents and sounds), Ice Cream Queen is a familiar schmatta-to-silk brocade story of immigrant New York...an upside-down, funhouse treat. You'll lick it up." - USA TodayIn 1913, little Malka Treynovsky flees Russia with her family. Bedazzled by tales of gold and movie stardom, she tricks them into buying tickets for America. Yet no sooner do they land on the squalid Lower East Side of Manhattan when Malka is crippled and abandoned in the street.Taken in by an Italian ices peddler, she manages to survive through cunning and inventiveness. As she learns the secrets of his trade, she begins to shape her own destiny. She falls in love with a gorgeous, illiterate radical named Albert, and they set off across America in an ice cream truck. Slowly, she transforms herself into Lillian Dunkle, "The Ice Cream Queen" -- doyenne of an empire of ice cream franchises and a celebrated television personality. Yet Lillian Dunkle is nothing like the whimsical motherly persona she crafts for herself in the media. Conniving, profane, and irreverent, she is a supremely complex woman who prefers a good stiff drink to an ice cream cone. And when her past begins to catch up with her, everything she has spent her life building will be at stake.

The Tin Horse
by Janice Steinberg

In the stunning tradition of Lisa See, Maeve Binchy, and Alice Hoffman, The Tin Horse is a rich multigenerational story about the intense, often fraught bond sisters share and the dreams and sorrows that lay at the heart of the immigrant experience....

Set in London of the 1660s and of the early twenty-first century, The Weight of Ink is a sophisticated work of historical fiction about women separated by centuries, and the choices and sacrifices they must make in order reconcile the life of the he...