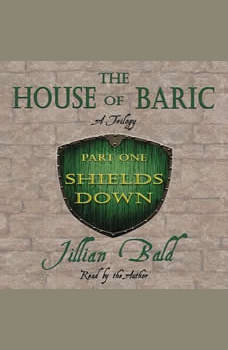 The House of Baric Part One: Shields Down

Series: The House of Baric Trilogy

Take the spanning saga of Outlander without the time travel. Sprinkle in the brooding nobility of Poldark, going a few hundred years back to 1649. Add a dusting of Downton Abbey’s upstairs downstairs drama. Shake it all together with the flamboyant decadence of baroque-era Venice. Then set the scene on the stunning shores of Croatia. That is the recipe for The House of Baric trilogy.

"This is a delightful series..." - Historical Novel Society Book Review

The dreaded day finally came for Mauritius Baric: his father was dead, his brother was dead, and he was now heir to the House of Baric. He could no longer shirk his duty, and that included marrying his assigned bride.

Resi Kokkinos, the only daughter of an Ottoman sea trader, did not want to marry a Venetian nobleman in a faraway land anymore than Mauro Baric wanted a Greek girl for a wife. Though smart and determined, Resi too must fulfill her duty to her family. Her arranged marriage would settle her father’s debt.

The saga takes flight in the summer of 1649 on the Croatian shores of the Adriatic. The Venetian Empire was a decadent, dynamic, and romantic world. Resi must find her place as Baroness Baric in a life she was not ready for. And Mauro was not ready for such a captivating woman as his wife.

Before love can bloom between the newlyweds, unexpected visitors stir up trouble at Baric Castle. But Mauro has other pressing problems as his personal demons weigh heavily on him.

This intriguing trilogy, with its entertaining ensemble of characters, is brimming with drama, humor, romance, and adventure. Enter the House of Baric. It all begins with Shields Down.