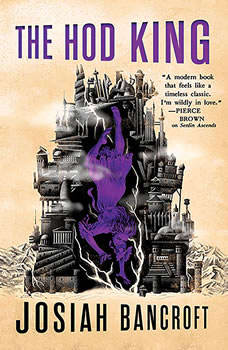 Series: The Books of Babel #3

Thomas Senlin and his crew of outcasts have been separated, and now they must face the dangers of the labyrinthine tower on their own in this third book in the word-of-mouth phenomenon fantasy series."One of my favorite books of all time." - Mark Lawrence on Senlin AscendsFearing an uprising, the Sphinx sends Senlin to investigate a plot that has taken hold in the ringdom of Pelphia. Alone in the city, Senlin infiltrates a bloody arena where hods battle for the public's entertainment. But his investigation is quickly derailed by a gruesome crime and an unexpected reunion.Posing as a noble lady and her handmaid, Voleta and Iren attempt to reach Marya, who is isolated by her fame. While navigating the court, Voleta attracts the unwanted attention of a powerful prince whose pursuit of her threatens their plan.Edith, now captain of the Sphinx's fierce flagship, joins forces with a fellow wakeman to investigate the disappearance of a beloved friend. She must decide who to trust as her desperate search brings her nearer to the Black Trail where the hods climb in darkness and whisper of the Hod King. As Senlin and his crew become further dragged in to the conspiracies of the Tower, everything falls to one question: Who is The Hod King?The Books of Babel:Senlin AscendsArm of the SphinxThe Hod King

The Books of Babel Bundle

The Hod King
The Books of Babel #3

Senlin Ascends
The Books of Babel #1

Arm of the Sphinx
The Books of Babel #2