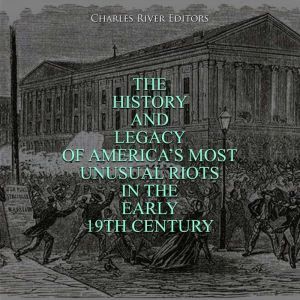 Riots are an aspect of American history that do not show up much in history textbooks, except for famous disturbances like the Boston Tea Party or the infamous New York City draft riots of 1863. The reality is that the country has experienced thousands of riots, from early colonial times through to the present, and the issues leading up to some of the riots may seem quite peculiar to modern Americans. For example, in 1788, the deadly Doctors' Riot occurred in New York City over the robbing of graves to provide medical students with bodies to dissect. An even stranger riot was the Eggnog Riot of 1826, when cadets at the United States Military Academy at West Point rioted over Christmas eggnog. Where this took place is just as odd as the riot itself.

In 1844, a debate in Philadelphia over whether to allow Catholic students in public schools to read the Catholic Douay Bible rather than the King James Version sparked two savage riots, known as the Bible Riots. In the City of Brotherly Love, the Bible Riots caused a number of casualties, and two churches and a seminary were burned to the ground.

In 1849, another deadly riot, the Astor Place Riot, occurred in New York City over whether a British actor or an American one was better. There were more real deaths outside the theater than fictional deaths onstage during the play Macbeth. Just a few years later, a slave owner tracked down his fugitive slaves to a residence in Christiana, near Philadelphia, and the riot that followed featured the owner and a black man yelling Bible verses at each other as the confrontation escalated.

These are some of the stories told in The History and Legacy of America’s Most Unusual Riots in the Early 19th Century, which explains the origins of the riots and their lasting impact.