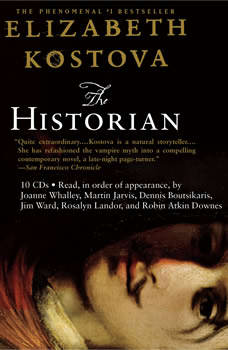 Breathtakingly suspenseful and beautifully written, THE HISTORIAN is the story of a young woman plunged into a labyrinth where the secrets of her family's past connect to an inconceivable evil: the dark fifteenth-century reign of Vlad the Impaler and a time-defying pact that may have kept his awful work alive through the ages. The search for the truth becomes an adventure of monumental proportions, taking us from monasteries and dusty libraries to the capitals of Eastern Europe in a feat of storytelling so rich, so hypnotic, so exciting that it has enthralled listeners around the world.

Dexter in the Dark
by Jeff Lindsay

“One of the most likable vigilante serial killers” (The New Yorker) faces his ultimate adversary…an evil so terrifying it scares away Dexter’s inner monster—and nearly dries up his sense of humor—in this wickedly ...

There have been a few dumb books that I have read in my life and this ranks up there with the dumbest. Listening just made it funnier with the eerie violin music and Dracula's Hollywood voice. I was glad that I had the abridged version and didn't plow through 700 pages. Kostova made a good attempt, but where was she going with this theme? It was so convienent to have all those letters left behind by all the main characters. Probably will make a gory movie.

stuck thru to the end, b/c i have long commute and no other CD arriving for a while. kept waiting for some historic details or some new dracula angle to emerge or some reason to be interested in the characters but it never happened. it's like a child's simplified board book version of dracula.

I wanted to love this book. It really started out interesting and it was a nice change from most vampire novels. But the middle, D R A G G E D on forever! The two story idea would have worked, really could have worked, if it hadn't been so boring. It wasn't a horrible story, it just could use to lose some weight.