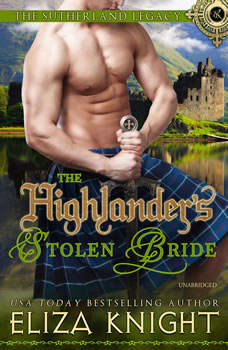 From the bestselling author of the Stolen Bride Series comes a brand new and exciting family saga! For fans of Scottish historical romance, the Sutherland Legacy propels you into the Highlands with tales of daring adventure, irresistible heroes, and passion!Magnus "Strath" Sutherland, Laird of Dornoch, refuses to marry after being betrayed by his betrothed's father. Needing to distance himself from the Highlands, he accepts a commission at the Scottish border by the king, where he must squelch an English lord's plans to lay siege. What he finds is the Scots' enemy about to wed a most alluring English lass. What better way to torment his enemy than by defeating his army and stealing his beautiful bride?Eva de Clare, youngest daughter of the Earl of Northwyck, is about to be pledged in matrimony to a cruel lord who has blackmailed her family, when a terrifying Highlander interrupts the ceremony. The horror stories she's heard about the warriors of the north must be true, but none seem to compare when she is literally plucked from where she stands and whisked across the Scottish border.At first, Strath intends to toss the Sassenach lass into a dark cell and forget about her, but there is something about the way she defies him that he finds captivating, not to mention how very much he'd like to kiss her. Eva isn't about to be made into a prisoner of war, and she's definitely not going to be sent back to England to marry her enemy. Though at first the Highlander frightened her, she sees kindness beneath his hard exterior. Perhaps the key to her survival will be convincing this warrior to take her for himself. And perhaps Strath just might have found the only woman who could warm his hardened heart.