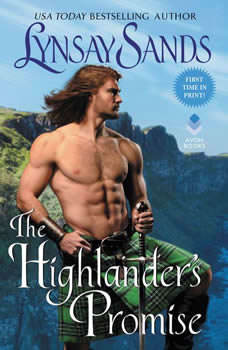 In a spellbinding new Highlands story from New York Times bestselling author Lynsay Sands, the laird of the Buchanans finds the one woman who is his equal in passion and courage.Aulay Buchanan has retreated to his clan’s hunting lodge for a few days of relaxation. But the raven-haired beauty he pulls from the ocean puts an end to any chance of rest. Though he christens her Jetta, she knows nothing of her real identity, save that someone is trying to kill her. As she recovers, it will not be easy for Aulay to protect her and keep her honor intact when she mistakenly believes they are man and wife…Jetta sees beyond Aulay’s scars to the brave, loyal warrior she’s proud to call her own. But as the attempts on her life grow more brazen, Jetta realizes that not all is as she believes. And if Aulay is not her husband, can she trust the desire flaring in his eyes, or his promise to defend her with his life?