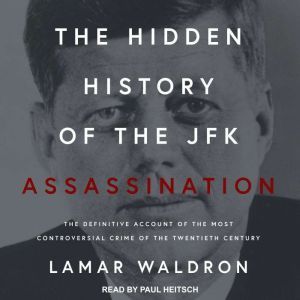 The Hidden History of the JFK Assassination: The Definitive Account of the Most Controversial Crime of the Twentieth Century

November 22, 2013 marks the 50th anniversary of the tragedy that has haunted America ever since. For the first time, this concise and compelling book pierces the veil of secrecy to fully document the small, tightly-held conspiracy that killed President John F. Kennedy. It explains why he was murdered, and how it was done in a way that forced many records to remain secret for almost fifty years. The Hidden History of the JFK Assassination draws on exclusive interviews with more than two dozen associates of John and Robert Kennedy, in addition to former FBI, Secret Service, military intelligence, and Congressional personnel, who provided critical first-hand information. The book also uses government files—including the detailed FBI confession of notorious Mafia godfather Carlos Marcello—to simply and clearly reveal exactly who killed JFK. Using information never published before, the book uses Marcello's own words to his closest associates to describe the plot. This book builds on the work of the last Congressional committee to investigate JFK's murder, which concluded that JFK "was probably assassinated as a result of a conspiracy," and that godfathers "[Santo] Trafficante [and Carlos] Marcello had the motive, means, and opportunity to assassinate President Kennedy."