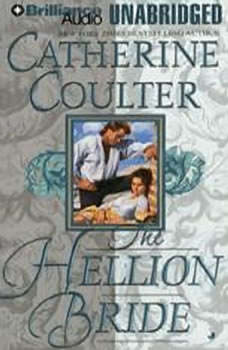 Dear Reader, Ryder Sherbrooke is a fun-loving rake with a secret. When he travels to Jamaica to solve the mystery of the supernatural goings-on at the Sherbrooke sugar plantation, he finds another mystery as well - a sophisticated nineteen-year-old girl, Sophia Stanton-Greville, who wants to bed him. And not, he believes, because she is simply enthralled with his handsome self or his boundless charm. Sophia has successfully controlled every man in her orbit until she meets Ryder Sherbrooke, a man she knows immediately is different from the others, a man she sees as one of hell's own sons. Ryder, confident as only a successful rake can be when it comes to knowing women, sets out to teach her who is in charge. It's said she already has three lovers. Is she indeed the outrageous tease she appears? A seductress? Or is she an innocent with an ugly and terrifying secret? As to Ryder's secret, you will see. You will also meet Douglas and Alexandra Sherbrooke from The Sherbrooke Bride; Sinjun Sherbrooke; and the Virgin Bride. The Heiress Bride will feature Sinjun Sherbrooke and Colin Kinross, an impoverished Scottish earl, who does his best to sink the unsinkable Sinjun. Please write me at P.O. Box 17, Mill Valley, CA 94942, e-mail me at ReadMoi@gmail.com, and visit my website at www.catherinecoulter.com. Catherine Coulter

For five years after her father died, lithe, beautiful Dee Swann held on to Angel Creek valley and her independence. The homestead was hers, and she vowed no one else would ever own it...or her. Then Lucas Cochran came back to Colorado. In the droug...

At sixteen Phoebe Layton had imagined that Gabriel Banner was a brave and valiant knight, a noble-hearted hero born to rescue ladies in distress. Which was why, eight years later, when she desperately needed help to carry out a vital quest she could...

There was no doubt about it. What Miss Harriet Pomeroy needed was a man. Someone powerful and clever who could help her rout the unscrupulous thieves who were using her beloved caves to hide their loot. But when Harriet summoned Gideon Westbrook Vis...