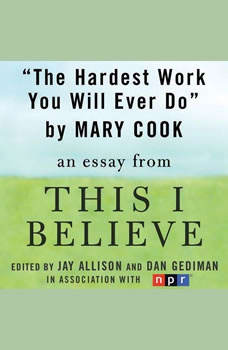 The Hardest Work You Will Ever Do: A "This I Believe" Essay

Mary Cook explains how her recovery from grief taught her that grieving is not a battle, but a surrender, in "The Hardest Work You Will Ever Do", her contribution to NPR’s This I Believe series.

The Hardest Work You Will Ever Do: ...
This I Believe