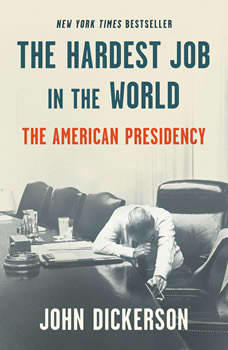 The Hardest Job in the World: The American Presidency

"The office is kinda like the little country boy found a hoochie coochie show at the carnival. Once he paid his dime and got inside the tent: it ain't exactly as it was advertised."
--Lyndon Johnson

Imagine you have just been elected president. You are now commander-in-chief, chief executive, chief diplomat, chief legislator, chief of party, chief voice of the people, first responder, chief priest, and world leader. You're expected to fulfill your campaign promises, but you're also expected to solve the surprising and urgent crises of the day. What's on your to-do list? Where would you even start?

The American presidency is in trouble. It has become overburdened, misunderstood, almost impossible to do. "The problems in the job unfolded before Donald Trump was elected, and the challenges of governing today will confront his successors," writes John Dickerson. After all, the founders never intended for our system of checks and balances to have one superior Chief Magistrate, with Congress demoted to "the little brother who can't keep up."

In this eye-opening book, John Dickerson writes about presidents in history such as Washington, Lincoln, FDR, and Eisenhower, and in contemporary times, from LBJ and Reagan to Bush, Obama, and Trump, to show how a complex job has been done, and why we need to reevaluate how we view the presidency, how we choose our presidents, and what we expect from them once they are in office. Think of the presidential campaign as a job interview. Are we asking the right questions? Are we looking for good campaigners, or good presidents? Once a candidate gets the job, what can they do to thrive? Drawing on historical research and interviews with current and former White House staffers, Dickerson shows what the job of president actually entails, identifies the things that only the president can do, and analyzes how presidents across time have managed the different burden. What qualities make for a good president? Who did it well? Why did Bill Clinton call the White House "the crown jewel in the American penal system"? And what lessons can we draw from past successes and failures? Ultimately, in order to evaluate candidates properly for the job, we need to adjust our expectations, and be more realistic about the goals, the requirements, and the limitations of the office.

As Dickerson writes, "Americans need their president to succeed, but the presidency is now set up for failure. It doesn't have to be."