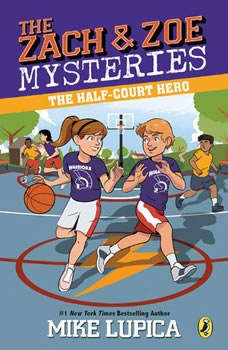 Series: Zach and Zoe Mysteries, The #2

There's nothing eight-year-old twins Zach and Zoe Walker love more than playing sports and solving mysteries. And when those two worlds collide . . . well it doesn't get any better than that. When the twins start a summer basketball league at their local park, they notice the once rundown court is getting freshened up with each passing day. First new nets, then the benches have been completely restored. But who's behind it? Zach and Zoe are on the case!

In the opening installments of the Zach and Zoe Mysteries, bestselling author Mike Lupica begins a series for a new and younger audience, introducing listeners to a sports-loving detective duo who can swing for the fences and catch the culprit in one fell swoop. With a recipe equal parts sports and mystery, the Zach and Zoe Mysteries break fresh ground for an author who has been called the greatest sportswriter for kids.

Zach and Zoe Mysteries, The Bundle

Get 5% off your total order by adding 3 or more audiobooks from Zach and Zoe Mysteries, The

The Half-Court Hero
Zach and Zoe Mysteries, The #2

The Missing Baseball
Zach and Zoe Mysteries, The #1