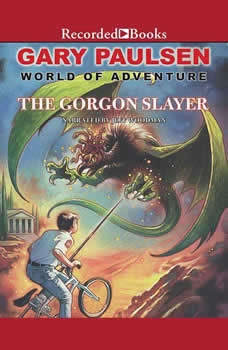 A Gary Paulsen World of Adventure book, The Gorgon Slayer takes young listeners into the exciting world of ancient heroes and monsters. A horrid shriek erupted from behind the stairs, and clammy, leathery wings exploded into Warren's face. He slammed his eyes shut and beat the Gorgon off, hearing Rick's sword swish through empty air. Warren dove back, rolled on his shoulder, and came up clear, his sword slicing in every direction. With his turned-up nose and pointy ears, Warren Trumbull looks a lot like a pig. Even in a world of evil warlocks and eight-foot cyclops, Warren is an oddball. He gets the worst assignments working for Prince Charming's Damsel in Distress Rescue Agency: assignments like exterminating a Gorgon-a mean, green, scaly, creature with the power to turn humans to stone. Warren doesn't want to become a rockhead. But he'll need all his courage, and surprising secret weapon, to win his wildest battle ever!