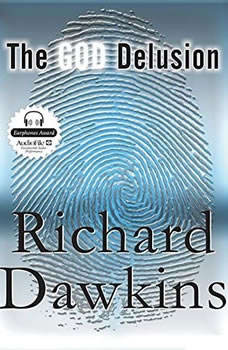 Discover magazine recently called Richard Dawkins "Darwin's Rottweiler" for his fierce and effective defense of evolution. Prospect magazine voted him among the top three public intellectuals in the world (along with Umberto Eco and Noam Chomsky). Now Dawkins turns his considerable intellect on religion, denouncing its faulty logic and the suffering it causes. He critiques God in all his forms, from the sex-obsessed tyrant of the Old Testament to the more benign (but still illogical) Celestial Watchmaker favored by some Enlightenment thinkers. He eviscerates the major arguments for religion and demonstrates the supreme improbability of a supreme being. He shows how religion fuels war, foments bigotry, and abuses children, buttressing his points with historical and contemporary evidence. In so doing, he makes a compelling case that belief in God is not just irrational, but potentially deadly. Dawkins has fashioned an impassioned, rigorous rebuttal to religion, to be embraced by anyone who sputters at the inconsistencies and cruelties that riddle the Bible, bristles at the inanity of "intelligent design," or agonizes over fundamentalism in the Middle East-or Middle America.

Church in the End Times
by Chuck Missler

Thoughts From the Mount of Blessing
by Ellen G. White