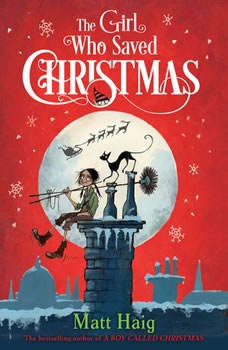 The Girl Who Saved Christmas

"If somewhere in the afterlife Roald Dahl met Charles Dickens and they cooked up a new Christmas tale, it couldn’t have much on this fleet, verbally rambunctious, heart-stealing follow-up to A Boy Called Christmas."—The New York Times

Amelia Wishart was the first child ever to receive a Christmas present. It was her Christmas spirit that gave Santa the extra boost of magic he needed to make his first trip around the world. But now Amelia is in trouble.

When her mother falls ill, she is sent to the workhouse to toil under cruel Mr. Creeper. For a whole year, Amelia scrubs the floors and eats watery gruel, without a whiff of kindness to keep her going. It’s not long before her hope begins to drain away.

Meanwhile, up at the North Pole, magic levels dip dangerously low as Christmas approaches, and Santa knows that something is gravely wrong. With the help of his trusty reindeer, a curious cat, and Charles Dickens, he sets out to find Amelia, the only girl who might be able to save Christmas. But first Amelia must learn to believe again. . . .

“Matt Haig has an empathy for the human condition, the light and the dark of it, and he uses the full palette to build his excellent stories.” —Neil Gaiman, Newbery-winning author of The Graveyard Book

"With a little bit of naughty and a lot of nice, this Christmastime yarn is a veritable sugarplum." —Kirkus Reviews