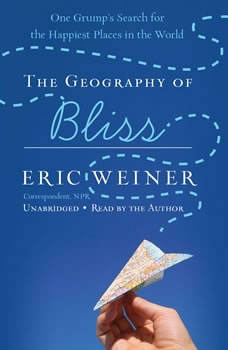 The Geography of Bliss: One Grump's Search for the Happiest Places in the World

Part travel memoir, part humor, and part twisted self-help guide, The Geography of Bliss takes the reader across the globe to investigate not what happiness is, but WHERE it is.Are people in Switzerland happier because it is the most democratic country in the world? Do citizens of Qatar, awash in petrodollars, find joy in all that cash? Is the King of Bhutan a visionary for his initiative to calculate Gross National Happiness? Why is Asheville, North Carolina so damn happy?In a unique mix of travel, psychology, science and humor, Eric Weiner answers those questions and many others, offering travelers of all moods some interesting new ideas for sunnier destinations and dispositions.

Change the world one trip at a time. In this illuminating collection of stories and lessons from the road, acclaimed travel writer Rick Steves shares a powerful message that resonates now more than ever.With the world facing divisive events and ...