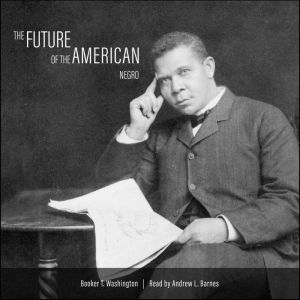 The Future of the American Negro

Booker Taliaferro Washington (1856-1915) was an African American political leader, educator and author. He was one of the dominant figures in African American history in the United States from 1890 to 1915. Born into slavery in Franklin County, Virginia, at the age of 9, he was freed and moved with his family to West Virginia, where he learned to read and write while working in manual labor jobs. He later trained as a teacher, and in 1881 was named the first leader of the Tuskegee Institute in Alabama. The Future of the American Negro was written to put more definite and permanent form the ideas regarding the condition of the negro. Booker T. Washington, a prominent African American leader, educator, and author, articulates the importance of Industrial education. He emphasized the importance of the development of the Negro in hand and heart training, which would provide the solid foundation necessary to attain the highest form of citizenship. This volume is the outgrowth of a series of articles written to enlighten readers on the doctrine of Industrial education that would address the mistakes of the reconstruction period. Booker T. Washington expresses arguments through sound reason in an impassioned plea to resolve the problems of increased crime, ignorance, discrimination, and debilitating debt crippling the black race. He substantiates his case with inspiring examples of former students of the Tuskegee Normal and Industrial Institute who overcame adversity to achieve their dreams. Listeners will develop a greater understanding of the horrific outcomes of slavery, the colossal errors of the reconstruction period, the extreme levels of poverty and ignorance, the failures of government, and the instability of industry in the south. In the midst of these problems, Booker provides a remedy, which in many respects is still relevant to the future of the American Negro.