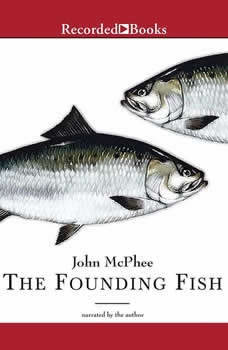 The Founding Fish is the shad, and John McPhee's veneration for it is both scientific and culinary. McPhee was awarded the Pulitzer Prize for Annals of the Former World. Noted for his accessible and perceptive studies of the physical world, he weaves together strands of personal, natural, and national history in this absorbing study that traces the shad's importance from the 17th century to his family's dinner table.

“A powerful and inspiring story. Guido Rahr’s mission to save the wild Pacific salmon leads him into adventures that make for a breathtakingly exciting read.”—Ian Frazier, author of Travels in Siberia In the tradition of...

Do you keep Betta fish or are you thinking about buying some?Do you know how to look after them to make sure they have the best live possible?This book will help you to make the right choices!Betta fish are some of the most beautiful and colourful m...

From the award-winning author of The Mushroom Hunters comes the story of an iconic fish, perhaps the last great wild food: salmon. For some, a salmon evokes the distant wild, thrashing in the jaws of a hungry grizzly bear on TV. For others, it&rsquo...

The Life of Fish
by Jack Anderson

Fly Fishing: Your Step-By-Step Guide To Fly Fishing; Learn How to Improve Your Fly Fishing & Catching With Tips and Tricks from Expert Anglers
by Kevin M. Clark

Fly fishing is absorbing. For some it's the scenery and solitude of the wild surroundings. For others it's the anticipation of what the next cast will bring. Hours of tranquility are punctuated by heart-racing excitement. It's addictive, challenging...

Draft No. 4
by John McPhee

The long-awaited guide to writing long-form nonfiction by the legendary author and teacher Draft No. 4 is an elucidation of the writer's craft by a master practitioner. In a series of playful but expertly wrought essays, John McPhee shares insights ...

"Kings of the Yukon succeeds as an adventure tale, a natural history and a work of art." -- Wall Street JournalOne man's thrilling and transporting journey by canoe across Alaska in search of the king salmonThe Yukon river is 2,000 miles long, the ...

What a Fish Knows
by Jonathan Balcombe

An underwater exploration that overturns myths about fishes and reveals their complex lives, from tool use to social behavior There are more than thirty thousand species of fish--more than all mammals, birds, reptiles, and amphibians combined. But f...