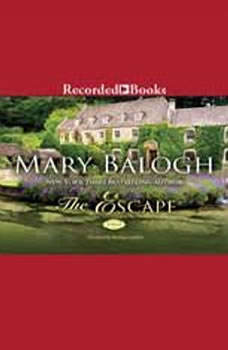 After surviving the Napoleonic Wars, Sir Benedict Harper is struggling to move on, his body and spirit in need of a healing touch. Never does Ben imagine that hope will come in the form of a beautiful woman who has seen her own share of suffering. After the lingering death of her husband, Samantha McKay is at the mercy of her oppressive in-laws—until she plots an escape to distant Wales to claim a house she has inherited. Being a gentleman, Ben insists that he escort her on the fateful journey. Ben wants Samantha as much as she wants him, but he is cautious. What can a wounded soul offer any woman? Samantha is ready to go where fate takes her, to leave behind polite society and even propriety in her desire for this handsome, honorable soldier. But dare she offer her bruised heart as well as her body? The answers to both their questions may be found in an unlikely place: in each other’s arms.

Don't Bargain with the Devil
by Sabrina Jeffries

A Matter of Class
by Mary Balogh

Reginald Mason is wealthy, refined, and, by all accounts, a gentleman. However, he is not a gentleman by birth, a factor that pains him and his father, Bernard Mason, within the Regency society that upholds station over all else. That is, until an o...

Everyone knows that Colin Bridgerton is the most charming man in London. Penelope Featherington has secretly adored her best friend's brother for . . . well, it feels like forever. After half a lifetime of watching Colin Bridgerton from afar, she th...

In this glittering Regency romance from acclaimed author Tracy Anne Warren, wallflower Eliza Hammond has suddenly become a wealthy heiress. Now, every eligible bachelor is interested in marrying her. Hoping to instruct Eliza in the social graces...

Not quite as perfect as Book 2, The Arrangement, which I gave 5 stars but I owe it an extra half star for including The Suitor, the short story which fits between the two in time. Not much of a story, but it was frustrating to think Id miss a little chunk of the series because I dont have an Ereader. Love this series, so at least Ill have the whole thing once I finish book 6 or 7. Im still wondering if George & Imogen will get seperate books or share one, since theyve been living together for a while already. Last time I checked Ms Baloughs website, #4 was done and she was working on #5.