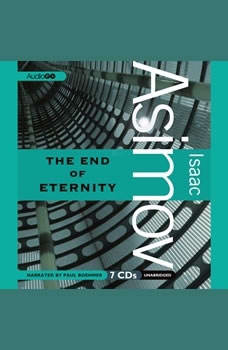 The End of Eternity

This stand-alone novel is widely regarded as Asimov's best science fiction novel. Andrew Harlan is an Eternal, a member of the elite of the future. One of the few who live in Eternity, a location outside of place and time, Harlan's job is to create carefully controlled and enacted Reality Changes. These Changes are small, exactingly calculated shifts in the course of history, made for the benefit of humankind. Though each Change has been made for the greater good, there are also always costs. During one of his assignments, Harlan meets and falls in love with Noys Lambert, a woman who lives in real time and space. Then Harlan learns that Noys will cease to exist after the next Change, and he risks everything to sneak her into Eternity.