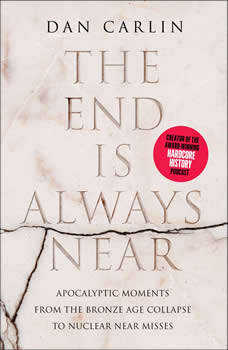 The End is Always Near: Apocalyptic Moments, from the Bronze Age Collapse to Nuclear Near Misses

The creator of the wildly popular award-winning podcast Hardcore History looks at some of the apocalyptic moments from the past as a way to frame the challenges of the future.

Do tough times create tougher people? Can humanity handle the power of its weapons without destroying itself? Will human technology or capabilities ever peak or regress? No one knows the answers to such questions, but no one asks them in a more interesting way than Dan Carlin.

In The End is Always Near, Dan Carlin looks at questions and historical events that force us to consider what sounds like fantasy; that we might suffer the same fate that all previous eras did. Will our world ever become a ruin for future archaeologists to dig up and explore? The questions themselves are both philosophical and like something out of The Twilight Zone.

Combining his trademark mix of storytelling, history and weirdness Dan Carlin connects the past and future in fascinating and colorful ways. At the same time the questions he asks us to consider involve the most important issue imaginable: human survival. From the collapse of the Bronze Age to the challenges of the nuclear era the issue has hung over humanity like a persistent Sword of Damocles.

Inspired by his podcast, The End is Always Near challenges the way we look at the past and ourselves. In this absorbing compendium, Carlin embarks on a whole new set of stories and major cliffhangers that will keep readers enthralled. Idiosyncratic and erudite, offbeat yet profound, The End is Always Near examines issues that are rarely presented, and makes the past immediately relevant to our very turbulent present.

For fans of Freakonomics and Thinking, Fast and Slow, here is a book by Hans Rosling, the scientist called "a true inspiration" by Bill Gates, that teaches us how to see the world as it truly is. Factfulness: The stress-reducing habit of only carryi...

One of the world’s most beloved and bestselling writers takes his ultimate journey -- into the most intriguing and intractable questions that science seeks to answer.In A Walk in the Woods, Bill Bryson trekked the Appalachian Trail -- well, mo...

A captivating history of the universe -- from before the dawn of time through the far reaches of the distant future. Most historians study the smallest slivers of time, emphasizing specific dates, individuals, and documents. But what would it look l...

The Silk Roads
by Peter Frankopan

It was on the Silk Roads that East and West first encountered each other through trade and conquest, leading to the spread of ideas, cultures, and religions. From the rise and fall of empires to the spread of Buddhism and the advent of Christianity ...

Throughout human history, certain drinks have done much more than just quench thirst. As Tom Standage relates with authority and charm, six of them have had a surprisingly pervasive influence on the course of history, becoming the defining drink dur...

This acclaimed best-seller from popular historian Alison Weir is a fascinating look at the Tudor family dynasty and its most infamous ruler. The Six Wives of Henry VIII brings to life England’s oft-married monarch and the six wildly differen...

The Geography of Genius
by Eric Weiner

Travel the world with Eric Weiner, the New York Times bestselling author of The Geography of Bliss, as he journeys from Athens to Silicon Valley—and throughout history, too—to show how creative genius flourishes in specific places at spe...

One of the world’s most beloved and bestselling writers takes his ultimate journey -- into the most intriguing and intractable questions that science seeks to answer.In A Walk in the Woods, Bill Bryson trekked the Appalachian Trail -- well, mo...