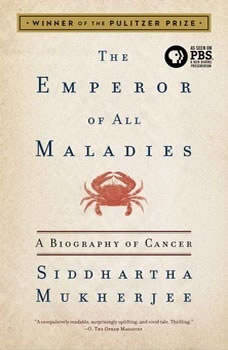 The Emperor of All Maladies: A Biography of Cancer

A magnificent, beautifully written "biography" of cancer"from its first documented appearances thousands of years ago through the epic battles to cure, control, and conquer it, to a radical new understanding of its essence. The Emperor of All Maladies reveals the many faces of an iconic, shape-shifting disease that is the defining plague of our generation. The story of cancer is a story of human ingenuity, resilience, and perseverance, but also of hubris, arrogance, paternalism, and misperception, all leveraged against a disease that, just three decades ago, was thought to be easily vanquished in an all out "war against cancer." Mukherjee recounts centuries of discoveries, setbacks, victories, and deaths, told through the eyes of his predecessors and peers, training their wits against an infinitely resourceful adversary. The book reads like a literary thriller with cancer as the central character. From the Persian Queen Atossa whose Greek slave may have cut off her diseased breast to the nineteenth-century recipients of primitive radiation and chemotherapy, to Mukherjee's own leukemia patient, Carla, The Emperor of All Maladies is about the people who have soldiered through toxic, bruising, and draining regimens in order to survive"and to increase the store of human knowledge.

Who Ate the First Oyster?
by Cody Cassidy