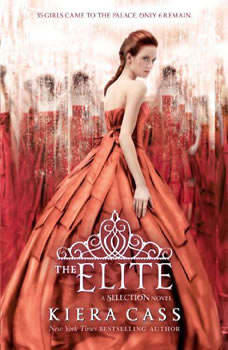 The second book in Kiera Cass’s #1 New York Times bestselling Selection seriesWith even more glamour, intrigue, and swoon-worthy romance, this sparkling sequel to The Selection will captivate readers who loved Veronica Roth’s Divergent, Lauren Oliver’s Delirium, or Renée Ahdieh’s The Wrath & the Dawn.Thirty-five girls came to the palace to compete in the Selection, and to win Prince Maxon’s heart. Now six girls remain, and the competition is fiercer than ever—but America Singer is still struggling to decide where her heart truly lies. Is it Prince Maxon—and life as the queen—that she wants? Or is it still Aspen, her first love?

The Crown
by Kiera Cass

Kiera Cass’s #1 New York Times bestselling Selection series has captured the hearts of readers from its very first page. Now the end of the journey is here. Prepare to be swept off your feet by The Crown—the eagerly awaited, wonderfully...

The One
by Kiera Cass

The captivating third book in Kiera Cass’s #1 New York Times bestselling Selection seriesAmerica Singer searches for her happily ever after in this swoon-worthy YA dystopian romance, perfect for readers who loved Veronica Roth’s Diverge...

The Elite
The Selection Novellas #2

The One
The Selection Novellas #3