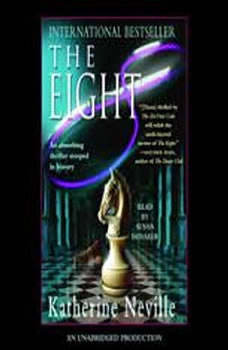 New York City, 1972—A dabbler in mathematics and chess, Catherine Velis is also a computer expert for a Big Eight accounting firm. Before heading off to a new assignment in Algeria, Cat has her palm read by a fortune-teller. The woman warns Cat of danger. Then an antiques dealer approaches Cat with a mysterious offer: He has an anonymous client who is trying to collect the pieces of an ancient chess service, purported to be in Algeria. If Cat can bring the pieces back, there will be a generous reward.

The South of France, 1790—Mireille de Remy and her cousin Valentine are young novices at the fortresslike Montglane Abbey. With France aflame in revolution, the two girls burn to rebel against constricted convent life—and their means of escape is at hand. Buried deep within the abbey are pieces of the Montglane Chess Service, once owned by Charlemagne. Whoever reassembles the pieces can play a game of unlimited power. But to keep the Game a secret from those who would abuse it, the two young women must scatter the pieces throughout the world. . . .

FROM THE AUTHOR OF THE #1 BESTSELLER CHILL FACTOR New York Times bestselling author Sandra Brown is back with a spine-tingling story of murder and betrayal -- and a homicide detective's struggle with his own rules of conduct. When Detective Serg...

In Janet Evanovich and Charlotte Hughes's Full Tilt, he lives life in the fast lane and she's along for the ride-with no brakes....Beaumont, South Carolina, has mint julips, ladies who lunch, good ole boy politics, and Jamie Swift. She's running her...

I found this book dull. It felt as if she tried too hard add historical figures into to what could have been a fairly good story. It helped my insomnia by putting me to sleep a few times.