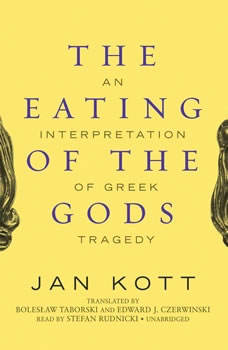 The Eating of the Gods: An Interpretation of Greek Tragedy

In The Eating of the Gods the distinguished Polish critic Jan Kott reexamines Greek tragedy from the modern perspective. As in his earlier acclaimed Shakespeare, Our Contemporary, Kott provides startling insights and intuitive leaps which link our world to that of the ancient Greeks. The title refers to the Bacchae of Euripides, that tragedy of lust, revenge, murder, and "the joy of eating raw flesh" which Kott finds paradigmatic in its violence and bloodshed. Whether reflecting on Prometheus or drawing a modern parallel in Beckett's Happy Days ("the final version of the Prometheus myth"), Kott's vision is brilliant, his method innovative, and his sensibility consistently new. Since this book first appeared, Kott's connections between ancient and modern have become even more compelling in their immediacy.

What does it take to stay human when humanity has lost the world? The characters of The Walking Dead live in a desolate post-apocalyptic world, filled with relentless violence and death. In reality, how would such never-ending stress and trauma affe...

“Dead Girls is everything I want in an essay collection: provocative lines of inquiry, macabre humor, blistering intelligence... I love this book. I want to take it into the middle of a crowded room and hold it up and scream until someon...

Chet and Bernie—everybody’s favorite human-canine detective team—are asked by a beautiful woman to find evidence that would put her cheating boyfriend in the doghouse in this e-original short story from New York Times bestselling a...

Everyone knows Sherlock Holmes. Sir Arthur Conan Doyle created a unique literary character who has remained popular for over a century and is appreciated more than ever today. But what made this fictional character, dreamed up by a small-town Englis...

Stories provide portals into other worlds, both real and imagined. The promise of escape draws people from all backgrounds to speculative fiction, but when people of color seek passageways into the fantastic, the doors are often barred. This problem...

This CliffsNotes study guide on Arthur Miller's Death of a Salesman supplements the original literary work, giving you background information about the author, an introduction to the work, a graphical character map, critical commentaries, expanded g...

Great poetry can indeed outlast stone and the glory of princes, and the English poetic tradition is perhaps the richest in the world. This audiobook tells the story of that tradition through its towering figures – Spenser and Shakespeare,...

From the internationally acclaimed, best-selling author of Brother, I'm Dying, a collection of vividly imagined stories about community, family, and love. Rich with hard-won wisdom and humanity, set in locales from Miami and Port-au-Prince to a smal...