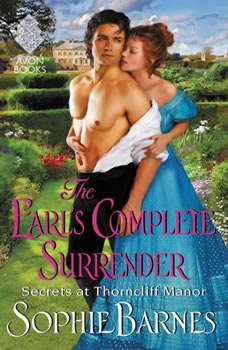 An unexpected passion ignites as secrets are exposed in Sophie Barnes's captivating Regency-set romanceDespite the diversions offered at Thorncliff Manor, former spy James, the Earl of Woodford, has one purpose in staying there. He must find an encoded book that exposes a conspiracy within the British aristocracy. And he must do so without revealing his purpose to the clever, tempting Chloe Heartly. The lady has a knack for appearing wherever it is least convenient. In the library. In the salon. And, especially, in his arms . . .Somewhere within Thorncliff's labyrinth of rooms lies the journal Chloe desperately seeks. When she realizes the brooding, handsome earl is hunting the same quarry, Chloe enters into an uneasy partnership. But in the face of public danger and enemies hiding in plain sight, both must decide how much they're willing to risk to solve the mysteries of the heart.