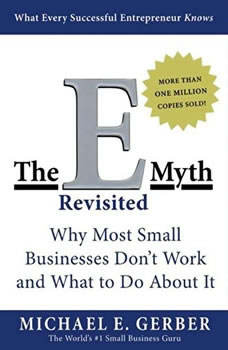 The E-Myth Revisited: Why Most Small Businesses Don't Work and

In this compact disc edition of the totally revised underground bestseller -- The E-Myth, Michael Gerber dispels the myths surrounding starting your own business and shows how commonplace assumptions can get in the way of running a business. He walks you through the steps in the life of a business -- from entrepreneurial infancy, through adolescent growing pains, to the mature entrepreneurial perspective, the guiding light of all businesses that succeed -- and shows how to apply the lessons of franchising to any business, whether or not it is a franchise. Finally, Gerber draws the vital, often overlooked distinction between working on your business and working in your business. After you have listened to The E-Myth Revisited, you will truly be able to grow your business in a predictable and productive way.