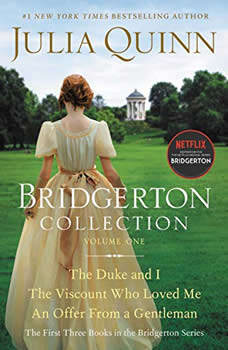 The Duke and I

Simon Basset, the irresistible Duke of Hastings, has hatched a plan to keep himself free from the town's marriage-minded society mothers. He pretends to be engaged to the lovely Daphne Bridgerton. After all, it isn't as if the brooding rogue has any real plans to marry-though there is something about the alluring Miss Bridgerton that sets Simon's heart beating a bit faster. And as for Daphne, surely the clever debutante will attract some very worthy suitors now that it seems a duke has declared her desirable. But as Daphne waltzes across ballroom after ballroom with Simon, she soon forgets that their courtship is a complete sham. And now she has to do the impossible and keep herself from losing her heart and soul completely to the handsome hell-raiser who has sworn off marriage forever!

Lady Sophia Sydney would do anything to ensnare the unattainable Sir Ross Cannon. Her goal — to ruin his reputation and cause a scandal that would be the talk of all London. So she insinuates herself into his life by gaining his trust and livi...

The Viscount Who Loved Me
Bridgertons