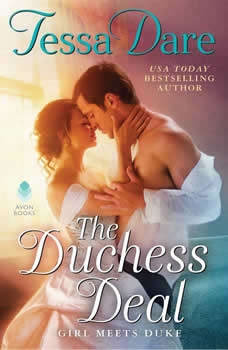 Series: Castles Ever After

When girl meets Duke, their marriage breaks all the rules…Since his return from war, the Duke of Ashbury’s to-do list has been short and anything but sweet: brooding, glowering, menacing London ne’er-do-wells by night. Now there’s a new item on the list. He needs an heir—which means he needs a wife. When Emma Gladstone, a vicar’s daughter turned seamstress, appears in his library wearing a wedding gown, he decides on the spot that she’ll do.His terms are simple:- They will be husband and wife by night only.- No lights, no kissing. - No questions about his battle scars. - Last, and most importantly… Once she’s pregnant with his heir, they need never share a bed again.But Emma is no pushover. She has a few rules of her own:- They will have dinner together every evening. - With conversation.- And unlimited teasing.- Last, and most importantly… Once she’s seen the man beneath the scars, he can’t stop her from falling in love…

We have all seen the avid reader who can read their way through most any situation......meals, bedtime, through classes, trips or any other activity. That was the way American author, Tessa Dare, got through her growing up years with parents who were constantly on the move. That comfort found in reading is what brought her to her career as a novelist. She also became a librarian where she was surrounded by books.

Dare is a New York Times and USA Today bestselling author of historical romance. Her novels mix humor, sensuality, and emotion that are relatable to modern readers. Her bestsellers are her "Sprinkle Cove", "Castles Ever After", and "Girl Meets Duke" series. Dare enjoys creating heroines who are not always ladylike. She enjoys dreaming up strong, willful, sexy heroes who find their hearts ensnared by those unconventional women.

Dare works as a part-time librarian and resides in Southern California with her husband and two children.

Castles Ever After Bundle

The Duchess Deal: Girl Meets Duke
Castles Ever After

Romancing the Duke
Castles Ever After #1

Say Yes to the Marquess
Castles Ever After #2