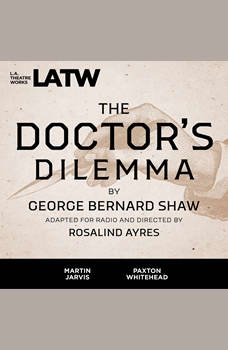 The blowhards, the know-it-alls, the scrupulous and the impecunious are all targets for Shaws incisive wit in his classic satire of the medical profession. A well-respected physician is forced to choose whom he shall save: a bumbling friend or the neer-do-well husband of the woman he loves. An L.A. Theatre Works full-cast performance featuring Jane Carr, Gregory Cooke, Kenneth Danziger, Roy Dotrice, Martin Jarvis, Jennifer Dundas Lowe, Simon Templeman, Douglas Weston and Paxton Whitehead. Includes a conversation with Dr. Neil Wenger, the Director of the Healthcare Ethics Center at the University of California-Los Angeles The Doctors Dilemma is part of L.A. Theatre Works Relativity Series featuring science-themed plays. Major funding for the Relativity Series is provided by the Alfred P. Sloan Foundation to enhance public understanding of science and technology in the modern world.