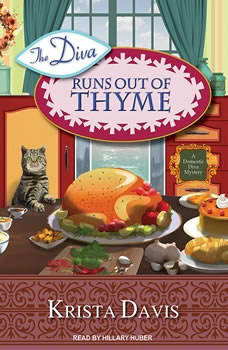 The Diva Runs Out of Thyme: A Domestic Diva Mystery

Few can compete with the Natasha Smith when it comes to entertaining, but her childhood rival, Sophie Winston, certainly tries. While Natasha is known for her intricate centerpieces and painstakingly prepared gourmet meals, Sophie likes to keep things simple . . . real simple. Natasha may have stolen the spotlight—and Sophie's husband—but Sophie is determined to take home the prize at the Stupendous Stuffing Shakedown. She just needs the right ingredients . . . However, Sophie's search for the perfect turkey takes a basting when she stumbles across a corpse. And when the police find her name and photo inside the victim's car, they think she has some explaining to do. Sophie will have to set her trussing aside to solve the murder—or she'll be serving up prison grub—and that definitely wouldn't be a good thing.

The Diva Takes The Cake
by Krista Davis

Sophie Winston's sister, Hannah, is getting married-again! And if you ask Sophie, her future brother-in-law is no prince. But is he a killer? That's the question on everyone's mind when his ex-wife is found hanging from a pergola. This is one event ...

A month before Christmas, I saw a ghost...Goldy Schulz is thrilled to be catering a holiday breakfast feast for the staff of the Aspen Meadow Library. But little does she know that on the menu is a large helping of murder.While setting up at the li...

Slay It with Flowers
by Kate Collins

Law school drop-out turned flower shop owner Abby Knight has been asked to be a bridesmaid by her cousin. But before the couple says "I do," a groomsman disappears, and another member of the wedding party is found dead. Abby has to hurry down an ais...

A Fool and His Honey
by Charlaine Harris

Family secrets step to the forefront in this dazzling mystery from NYT best-selling author Charlaine Harris. When her husband’s niece shows up unexpectedly, drops off a baby, and disappears, Aurora is overwhelmed. And then the niece’s hu...

The Diva Runs Out of Thyme: A Domes...
Domestic Diva #1