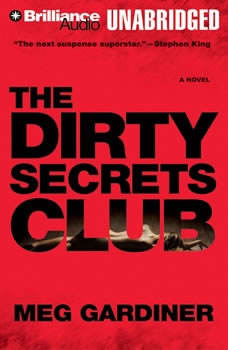 An ongoing string of high-profile and very public murder-suicides has San Francisco even more rattled than a string of recent earthquakes: A flamboyant fashion designer burns to death, clutching the body of his murdered lover. A superstar 49er jumps off the Golden Gate Bridge. And most shocking of all, a U.S. attorney launches her BMW off a highway overpass, killing herself and three others.Enter forensic psychiatrist Jo Beckett, hired by the SFPD to cut open not the victim’s body, but the victim’s life. Jo’s job is to complete the psychological autopsy, shedding light on the circumstances of any equivocal death. Soon she makes a shocking discovery: All the suicides belonged to something called the Dirty Secrets Club, a group of A-listers with nothing but money and plenty to hide. As the deaths continue, Jo delves into the disturbing motives behind this shadowy group—until she receives a letter that contains a dark secret Jo thought she’d left deep in her past, a secret that ends with the most chilling words of all: “Welcome to the Dirty Secrets Club.”Praise for Meg Gardiner:“If you read Sue Grafton, Lee Child, Janet Evanovich, Michael Connelly, or Nelson DeMille, you’re going to think Meg Gardiner is a gift from heaven.” —Stephen King“A winner in every way. The Dirty Secrets Club is nuanced and layered—and a harrowing thriller.… Meg Gardiner makes every one of her characters leap alive off the page.” —Jeffery Deaver“Meg Gardiner is an astonishing writer, and The Dirty Secrets Club is a humdinger of a thriller, with shocks and twists galore. I couldn’t turn the pages fast enough.” —Tess Gerritsen

"Julia Whelan reads the novel in her low, pleasant voice, moving down a register to capture Richard's infuriating condescension and lightening slightly for the younger Emma. With its perfidious turns, this escapist entertainment is a fine example of...

Meet Odd Thomas, the unassuming young hero of Dean Koontz’s dazzling New York Times bestseller, a gallant sentinel at the crossroads of life and death who offers up his heart in these pages and will forever capture yours. “The dead don&r...

WOW! I have never read anything by Meg Gardiner before but this wont be the last! She is an outstanding writer of suspense and Jo Beckett is a strong female character who is a forensic psychiatrist in San Francisco. The story grips you from the beginning and doesnt let up until the last pages when the real mastermind is revealed. Stephen King compared her to Michael Connolly and it is not just book jacket hype. This woman is good and it is refreshing to have a woman as a protagonist in a tough action packed novel of suspense. Cant wait to read more by her and she is going to be on my list of favorite authors if her other books are just as good.