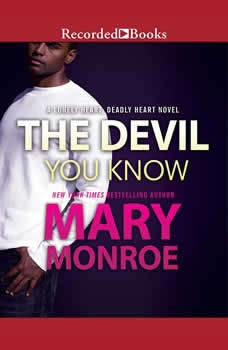 The Devil You Know

In the stunning climax of New York Times bestselling author Mary Monroe's Lonely Heart, Deadly Heart series, the tension-and the heat-reach unforgettable heights as two restless women go after the ultimate satisfaction.and a killer desire prepares to strike. For best friends Lola Poole and Joan Proctor-Riley, there's never too much when it comes to online dating rich, no-commitment lovers. It's a fantasy come true and makes their unhappy lives bearable. But there's no escape when Lola's vicious relatives cheat her out of everything that's hers and Joan's husband pulls a devastating betrayal. With nothing to lose, the two will do everything and anything to lock down Mr. Right and lifetime satisfaction.With his scorching sexual healing and compassionate nature, handsome trucker Calvin Ramsey keeps coming out on top with Lola. And she's this close to winning his love and finally getting the loving family of her dreams. But she doesn't suspect that Calvin's idea of making a woman his own is a fatal affair. Now, his gentle reassurances and sensual promises are spinning a web where Lola's deepest longings could be the deadliest trap of all. Narrators: Kentra Lynn, Bishop Banks, Adenrele Ojo

Get 5% off your total order by adding 3 or more audiobooks from Lonely Heart, Deadly Heart