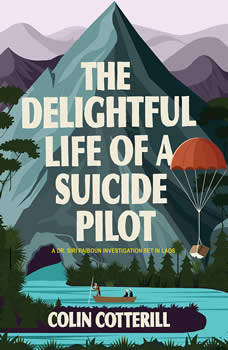 The Delightful Life of a Suicide Pilot

After 15 cunning, mischievous, heartbreaking, hilarious, eye-opening, and atmospheric installments, Colin Cotterill's award-winning Dr. Siri Paiboun series comes to a close. Make sure you don't miss this last chapter, a deliciously clever puzzle that illuminates the history of World War II in Southeast Asia. Laos, 1981: When an unofficial mailman drops off a strange bilingual diary, Dr. Siri is intrigued. Half is in Lao, but the other half is in Japanese, which no one Siri knows can read; it appears to have been written during the Second World War. Most mysterious of all, it comes with a note stapled to it: Dr. Siri, we need your help most urgently. But who is we, and why have they left no return address? To the chagrin of his wife and friends, who have to hear him read the diary out loud, Siri embarks on an investigation by examining the text. Though the journal was apparently written by a kamikaze pilot, it is surprisingly dull. Twenty pages in, no one has died, and the pilot never mentions any combat at all. Despite these shortcomings, Siri begins to obsess over the diarys abrupt ending . . . and the riddle of why it found its way into his hands. Did the kamikaze pilot ever manage to get off the ground? To find out, he and Madame Daeng will have to hitch a ride south and uncover some of the darkest secrets of the Second World War.

The Frame-Up
by Meghan Scott Molin

The Shadows We Hide
by Allen Eskens

Get 5% off your total order by adding 3 or more audiobooks from Dr. Siri Paiboun Mystery Set in Laos