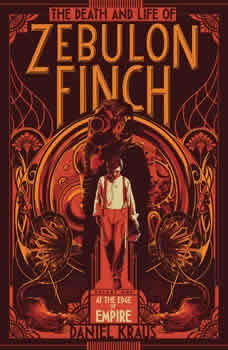 The Death and Life of Zebulon Finch, Volume 1: At the Edge of Empire

From the coauthor of the New York Times bestselling The Shape of Water comes the “utterly riveting” (Entertainment Weekly) tale of a murdered teen who is resurrected to walk the earth for more than a century.May 7, 1896. Dusk. A swaggering seventeen-year-old gangster named Zebulon Finch is gunned down by the shores of Lake Michigan. But after mere minutes in the void, he is mysteriously resurrected. His second life will be nothing like his first. Zebulon’s new existence begins as a sideshow attraction in a traveling medicine show. From there he will be poked and prodded by a scientist obsessed with mastering the secrets of death. He will fight in the trenches of World War I. He will run from his nightmares—and from poverty—in Depression-era New York City. And he will become the companion of the most beautiful woman in Hollywood. Love, hate, hope, and horror—Zebulon finds them. But will he ever find redemption? “Fearlessly weaving gore, love, philosophy, and social justice issues into one sharp whole” (BCCB), The Death and Life of Zebulon Finch, Volume One: At the Edge of Empire is the epic saga of what it means to be human in a world so often lacking in humanity.

Rush Revere and the Presidency
by Rush Limbaugh

The Slave Dancer
by Paula Fox

Island of the Blue Dolphins
by Scott O'Dell

The Land
by Mildred D. Taylor

I Survived #11: I Survived the Great ...
by Lauren Tarshis

Rush Revere and the American Revoluti...
by Rush Limbaugh