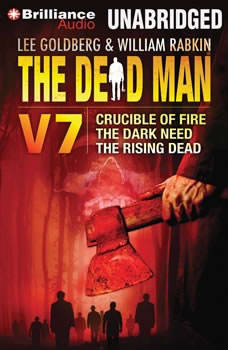 The Dead Man Vol 7: Crucible of Fire, The Dark Need, and The Rising Dead

After dying in a freak accident, Matt Cahill inexplicably “wakes up” three months later with the disturbing ability to see things—terrible things—that others cannot. Drafted as a warrior in the battle between good and evil, Matt will stop at nothing to destroy the malevolent Mr. Dark. In The Dead Man Volume 7, a trio of sinister new stories tracks the reluctant hero on his nightmarish quest. Matt Cahill is part of a team of smokejumpers who are dropped into the heart of a raging forest fire that is fueled by a flamethrower-wielding madman under the sway of Mr. Dark. Almost every living thing in this hellacious Crucible of Fire, including Matt's fellow firefighters, are falling prey to Mr. Dark's evil touch and bowing to his furious command: Kill the Dead Man!Matt is tracking a blood-sucking, shape-shifting killer through the icy Cascade Mountains when he encounters a mysterious woman who is on the same corpse-strewn trail...but who has a terrifying secret of her own...and an unspeakable lust for The Dark Need.In the blasted hell of the Arizona desert, Matt hitches a ride with a young couple who meets a terrible fate that he's powerless to stop. The bloody encounter leads him to a deadly stranger who may know why Matt became part of The Rising Dead. But first they must survive in an unforgiving wasteland to do battle with a gang of heavily-armed smugglers who trade in human flesh.