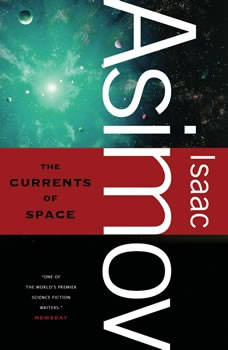 The Currents of Space

High above the planet Florinia, the Squires of Sark live in unimaginable wealth and comfort. Down in the eternal spring of the planet, however, the native Florinians labor ceaselessly to produce the precious kyrt that brings prosperity to their Sarkite masters. Rebellion is unthinkable and impossible. Living among the workers of Florinia, Rik is a man without a memory or a past. He has been abducted and brainwashed. Barely able to speak or care for himself when he was found, Rik is widely regarded as a simpleton by the worker community where he lives. But as his memories begin to return, Rik finds himself driven by a cryptic message he is determined to deliver: everyone on Florinia is doomed ... the Currents of Space are bringing destruction. But if the planet is evacuated, the power of Sark will end-so some would finish the job and would kill the messenger. The fate of the galaxy hangs in the balance.