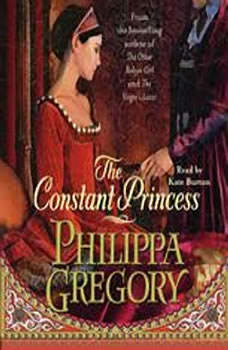 "I am Catalina, Princess of Spain, daughter of the two greatest monarchs the world has ever known...and I will be Queen of England." Thus, bestselling author Philippa Gregory introduces one of her most unforgettable heroines: Katherine of Aragon. Daughter of Queen Isabella and King Ferdinand of Spain, Katherine has been fated her whole life to marry Prince Arthur of England. When they meet and are married, the match becomes as passionate as it is politically expedient. But tragically, Arthur falls ill and extracts from his young bride a deathbed promise to marry his brother Henry, become Queen, and fulfill their dreams and her destiny. Widowed and alone in the avaricious world of the Tudor court, Katherine has to sidestep her father-in-law's desire for her and convince him, and an incredulous Europe, that her marriage to Arthur was never consummated, that there is no obstacle to marriage with Henry. For seven years, she endures the treachery of spies, the humiliation of poverty, and intense loneliness and despair while she waits for the inevitable moment when she will step into the role she has prepared for all her life. In The Constant Princess, Philippa Gregory brings to life one of history's most inspiring women and creates one of the most compelling characters in historical fiction.

Winter of the World
by Ken Follett

Picking up where Fall of Giants, the first novel in the extraordinary Century Trilogy, left off, Winter of the World follows its five interrelated families—American, German, Russian, English, and Welsh—through a time of enormous social, ...

The Chaperone
by Laura Moriarty

Soon to be a feature film from the creators of Downton Abbey starring Elizabeth McGovern, The Chaperone is a New York Times-bestselling novel about the woman who chaperoned an irreverent Louise Brooks to New York City in the 1920...

The Constant Princess
The Plantagenet and Tudor Novels