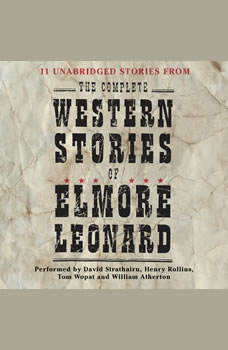 From Elmore Leonard, the author who has influenced more writers than anyother, come two thrilling stories of law in the Old West, upheld by the barrel of a six-gun.

"Three-ten to Yuma:" Deputy Paul Scallen will earn his one hundred fifty dollars if he can get his prisoner Jim Kidd on the train to Yuma Prison. But the members of Kidd's gang have determined that Scallen won't live long enough to make the Three-Ten to Yuma.

"Saint with a Six-Gun:" Bobby Valdez will hang in the morning and young Lyall Quinlan is proud to guard him through the night. But Valdez doesn't seem like a cold-blooded killer and his request for last rites may just set him free ... or get them both killed.

Performed by Henry Rollins, these classics of bullets and bad men demonstrate the superb talent for language and gripping narrative that made Elmore Leonard one of the most acclaimed writers of our time.