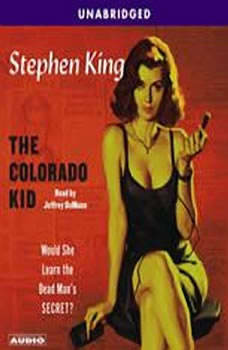 On an island off the coast of Maine, a man is found dead. There's no identification on the body. Only the dogged work of a pair of local newspapermen and a graduate student in forensics turns up any clues. But that's just the beginning of the mystery. Because the more they learn about the man and the baffling circumstances of his death, the less they understand. Was it an impossible crime? Or something stranger still...? No one but Stephen King could tell this story about the darkness at the heart of the unknown and our compulsion to investigate the unexplained. With echoes of Dashiell Hammett's The Maltese Falcon and the work of Graham Greene, one of the world's great storytellers presents a surprising tale that explores the nature of mystery itself...

Very unusual book - no plot, no mystery, lousy reader, and so on. If you want to waste some time, rent this book. In other words, it stunk!!

i enjoyed this book but it is definitely not the horror/thriller/exciting novel you might expect- if you read the one about the lost kid and baseball, can't remember the name of it- you would like this one. this is about the nature of mystery, it doesn't have the typical murder whodunit outline. i enjoyed the characters and i think i expected the way it ended because it had to end the way it did or the book lost its meaning. if you're looking for thrills, this isn't it- if you enjoy king's contemplative side, you'll like it. i don't think he has lost his touch, like the other reviewer says- he is just applying a different brush to a different type of story.

don't read this novel. There's no ending, happy or otherwise. I felt robbed.

To paraphrase Steven King: You were not an idiot to spend 6 years trying to solve the mysteries presented to you. The proof of a good mystery is the compulsion it creates to find the solution. It is not the solution itself. The search itself was the reward. Being just a short book with only one mystery and a handfull of characters, this wasn't nearly as much fun, but not nearly as frustrating either.