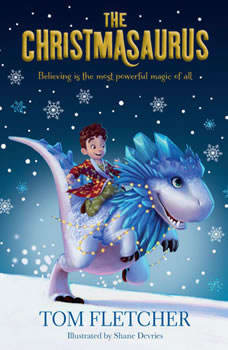 Why settle for a pony or a puppy for Christmas when you could have a dinosaur? A rollicking adventure from singer-songwriter and YouTuber Tom Fletcher.

Once upon a time--long, long ago, when dinosaurs roamed the Earth--an egg rolled away from its mother and landed in the ocean, where it froze solid and stayed peacefully for thousands of years. Then one day Santa and his elves discover the frozen egg, and Santa sits on it to see if it will hatch. But he can't guess what's inside. . . . A dinosaur!

Meanwhile, a young boy named William Trundle has only ever wished for one thing for Christmas: a dinosaur! So when Santa accidentally gives William the real Christmasaurus instead of a stuffed replica, it's the BEST CHRISTMAS EVER! Until an evil man known as the Hunter decides a dinosaur will be the perfect addition to his collection.

A wild and hilarious adventure ensues. An instant Christmas classic!