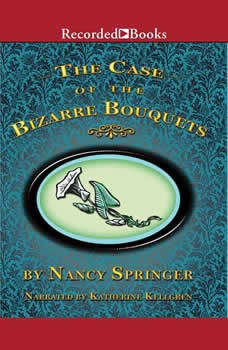 The Case of the Bizarre Bouquets

Nancy Springer is the two-time Edgar Award-winning, New York Times best-selling author of The Case of the Left- Handed Lady (RB# 98711). Dr. Watson, the right-hand man of master sleuth Sherlock Holmes, has gone missing. This prompts Sherlock to enlist the assistance of Enola Holmes, his intrepid younger sister. She investigates Watson's home just in time to witness the arrival of a bizarre bouquet blooming with convolvulus, hawthorn, and white poppies-flowers that symbolize death!

The Case of the Bizarre Bouquets
Enola Holmes Series #3

The Case of the Peculiar Pink Fan
Enola Holmes Series #4

The Case of the Cryptic Crinoline
Enola Holmes Series #5