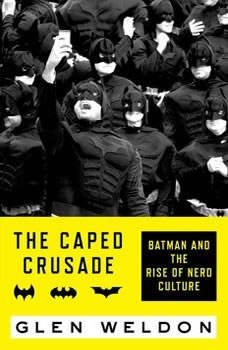 The Caped Crusade: Batman and the Rise of Nerd Culture

A witty, intelligent cultural history from NPR book critic Glen Weldon explains Batman’s rises and falls throughout the ages—and what his story tells us about ourselves.Since his creation, Batman has been many things: a two-fisted detective; a planet-hopping gadabout; a campy Pop-art sensation; a pointy-eared master spy; and a grim and gritty ninja of the urban night. For more than three quarters of a century, he has cycled from a figure of darkness to one of lightness and back again; he’s a bat-shaped Rorschach inkblot who takes on the various meanings our changing culture projects onto him. How we perceive Batman’s character, whether he’s delivering dire threats in a raspy Christian Bale growl or trading blithely homoerotic double-entendres with partner Robin on the comics page, speaks to who we are and how we wish to be seen by the world. It’s this endlessly mutable quality that has made him so enduring. And it’s Batman’s fundamental nerdiness—his gadgets, his obsession, his oath, even his lack of superpowers—that uniquely resonates with his fans who feel a fiercely protective love for the character. Today, fueled by the internet, that breed of passion for elements of popular culture is everywhere. Which is what makes Batman the perfect lens through which to understand geek culture, its current popularity, and social significance. In The Caped Crusade, with humor and insight, Glen Weldon, book critic for NPR and author of Superman: The Unauthorized Biography, lays out Batman’s seventy-eight-year cultural history and shows how he has helped make us who we are today and why his legacy remains so strong.