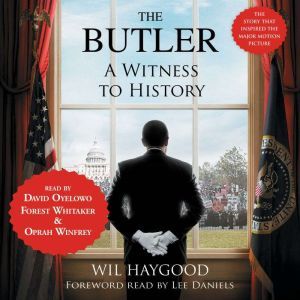 The Butler: A Witness to History

The Story That Inspired the Major Motion Picture...Read by its Stars David Oyelowo, Forest Whitaker, and Oprah WinfreyWhen acclaimed Washington Post writer Wil Haygood had an early hunch that Obama would win the 2008 election, he thought he'd highlight the singular moment by exploring the life of someone who had come of age when segregation was so embedded in the culture as to make the very thought of a black president inconceivable. He struck gold when he tracked down Eugene Allen, a butler who had served eight presidents, from Harry Truman to Ronald Reagan. Forest Whitaker narrates the story of this remarkable man who, while serving tea and supervising buffets, was also a witness to history as decisions about America's most momentous events were being made. With a foreword by the Academy Award-nominated director Lee Daniels, The Butler also includes Wil Haygood's essay exploring the history of black images on celluloid and in Hollywood, read here by David Oyelowo and Oprah Winfrey.