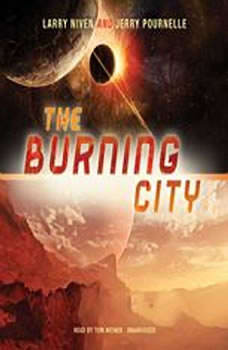 Each an acclaimed author in his own right, Larry Niven and Jerry Pournelle have collaborated on some of the biggest bestsellers in science fiction history, including the #1New York Timesbestseller Footfall. Here Niven and Pournelle have combined their award-winning talents and imaginations to produce a masterpiece of epic fantasy that rivals the works of Robert Jordan and David Eddings. Set in the world of Larry Nivens popularThe Magic Goes Away,The Burning Citytransports listeners to an enchanted ancient city bearing a provocative resemblance to our own modern society. There, Yangin-Atep, the volatile and voracious god of fire, alternately protects and destroys the citys denizens. In Teps Town, nothing can burn indoors, and no fire can startexcept when the Burning comes upon the city. At that time the people, possessed by Yangin-Atep, set their own town ablaze in a riotous orgy of destruction that often comes without warning.

Whandall Placehold has lived with the Burning all his life. Fighting his way to adulthood in the mean but magical streets of the citys most blighted neighborhoods, Whandall dreams of escaping the gods wrath to find a new and better life. But his best hope for freedom may lie with Morth of Atlantisthe enigmatic sorcerer who killed his father. Both gritty and exotic,The Burning Cityis a fantasy tale unlike any you have read before.