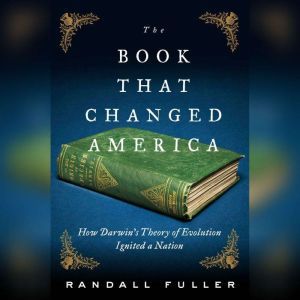 The Book That Changed America: How Darwin's Theory of Evolution Ignited a Nation

A compelling portrait of a unique moment in American history when the ideas of Charles Darwin reshaped American notions about nature, religion, science and race

Throughout its history America has been torn in two by debates over ideals and beliefs.  Randall Fuller takes us back to one of those turning points, in 1860, with the story of the influence of Charles Darwin’s just-published On the Origin of Species on five American intellectuals, including Bronson Alcott, Henry David Thoreau, the child welfare reformer Charles Loring Brace, and the abolitionist Franklin Sanborn.

Each of these figures seized on the book’s assertion of a common ancestry for all creatures as a powerful argument against slavery, one that helped provide scientific credibility to the cause of abolition.  Darwin’s depiction of constant struggle and endless competition described America on the brink of civil war.  But some had difficulty aligning the new theory to their religious convictions and their faith in a higher power.  Thoreau, perhaps the most profoundly affected all, absorbed Darwin’s views into his mysterious final work on species migration and the interconnectedness of all living things.

Creating a rich tableau of nineteenth-century American intellectual culture, as well as providing a fascinating biography of perhaps the single most important idea of that time, The Book That Changed America is also an account of issues and concerns still with us today, including racism and the enduring conflict between science and religion.